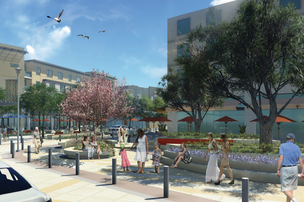 Courtesy of the New Home Co.

Foster Square will include about 30,000 square feet of ground-floor retail and a town square area.

Despite the wave of Baby Boomers who will soon reach retirement age, there are few new housing projects being built with older adults in mind.

It’s a looming housing crunch the San Francisco Business Times explored in-depth in January, and one Lennar Corp. had in mind when it picked up a big chunk of Foster Square — one of the more significant developments in the Peninsula city in recent years.

I wrote about the development earlier this week, and afterward grabbed a few minutes on the phone with Gordon Jones, Lennar’s regional division president. His company will build out 200 market-rate, age-restricted units at Foster Square — stacked, single-level flats in smaller, elevator-served buildings.

The community is part of a larger development next to Foster City’s city hall that will also include an Atria assisted-living facility and an affordable senior building from MidPen Housing.

“It’s pretty well known that this demographic group is just gigantic,” Gordon Jones told me. “And we think it’s an underserved demographic in the Bay Area. There are really no other age-qualified neighborhoods we know of coming out in the near future.”

Lennar is not just working on Foster Square. The publicly traded company currently has seven actively selling communities in the region, and will add seven more next year.

Its largest is Avenue One, a 640-unit development on the old Hitachi campus in South San Jose. About 100 of those are coveted single-family detached, with the rest condos and townhomes. Closings started last quarter, and already the community is 15 percent sold out, Jones said. An amenities building is under construction.

In Foster City, Lennar was attracted by the in-place approvals; the 15-acre project was master-planned by the New Home Co., which sold the lots to Lennar last week.

“One thing that was attractive as far as the acquisition for us was the timing,” Jones said. “We could start early next year.”

“New Home had put together a short list and chose Lennar because of our ability to move quickly and to do what we say we’re going to do,” he said.

Prices for Lennar’s Foster Square units have not been set, but will likely be in the low $1 millions. Jones expects many buyers to be moving down from larger homes that have built up equity in recent years.

Deliveries should begin sometime in early 2016.