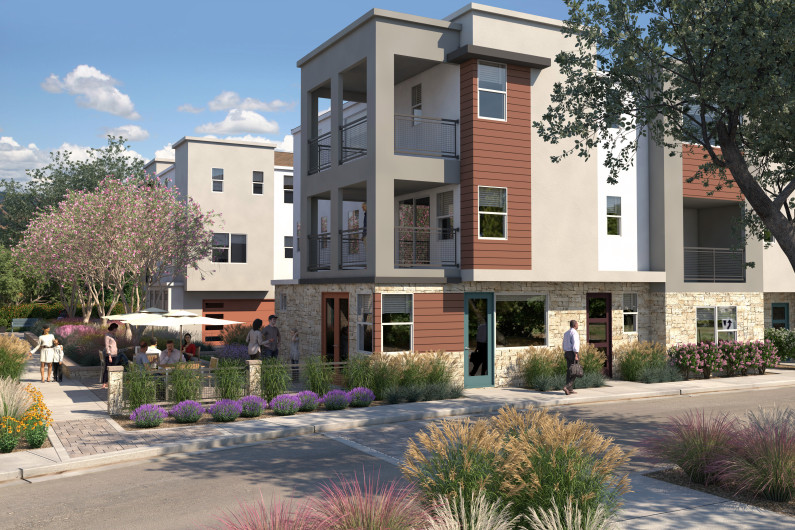 The 350 Merrydale Road development plan, as depicted in a design rendering, will place 45 condominiums in northern San Rafael. (Courtesy of Campus Property Group)

The commission voted unanimously on Tuesday to recommend that the City Council approve the development at 350 Merrydale Road, which is south of the Northgate mall. The complex would include 41 three-story townhouses and four two-story condominiums on the 2.3-acre site. Each of the units would be offered for sale.

Plans call for demolishing three one-story buildings that were once used by a school. A portion of the site is currently leased by Marin Ventures, a center for adults with disabilities. The site would need to be rezoned for residential use from its current designation as a daycare center.

“It just makes sense to change the land use to match what’s in the adjacent area, the other high-density residential zoning,” said Commissioner Jeff Schoppert.

The condos would be divided among nine three-story buildings. The complex would include 25 two-bedroom homes, 12 three-bedroom homes and eight four-bedroom homes. A community center for residents is also planned.

The developer, Larkspur-based Campus Property Group, submitted preliminary designs to the city for review in 2018 and held a meeting with neighbors to gather input.

“We got lots of feedback,” Michael Hooper, co-founder of Campus, told the Planning Commission on Tuesday.

During a review hearing last year, neighbors said they feared that the complex would encroach on their privacy and overwhelm street parking in the area.

Campus had planned to build rooftop decks above each of the units, but reversed that idea in response to the concerns about neighbors’ privacy, Hooper said.

The development team has touted the project as a “workforce housing” complex.

“It’s a great opportunity to provide housing so close to the new transportation,” the project’s architect, Adam Gardner, told the commission.

The site is near the SMART train’s Marin Civic Center Station, but “ironically, it’s kind of a route to get there because you can’t go across the tracks,” Gardner said.

The proposal follows San Rafael’s affordable housing requirements, with plans to offer 20% of the units for sale at below-market rates. Five units would be sold at rates affordable to low-income households and four at moderate-income rates.

San Rafael resident Greg Murray told the Planning Commission he supported the developer’s plans, noting he was “very happy that this wasn’t a high-density project.”

“The area is already saturated with apartments,” he said.